Adding and subtracting negative numbers – a vital topic. Yet even my sixth formers make mistakes using them, for example in differentiating reciprocals, or solving simultaneous equations. Much of this comes down to the classic ‘two minuses make a plus’ memory aid – a classic case of over-generalization – yet what can replace it? As Rob Brown tweeted, it’s not just hard to learn, but ‘hard to teach’. There seem to be so many different rules and exceptions.

@oldandrewuk I would love a blog post on how you would teach it. Ie which rules, in what order, for how long etc. I find this hard to teach.

Here’s my take: a few teaching approaches I’ve tried, my reflections, and my current approach (and the lesson Powerpoint I currently use – though it makes much more sense if you read on!). 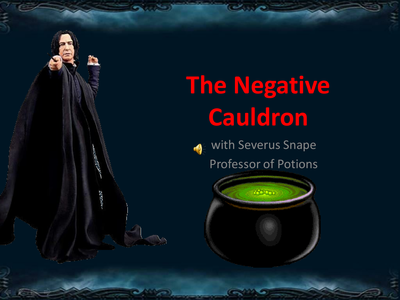 At first I enlisted the help of Severus Snape and this creative resource, which offers a nice explanation for the concepts. Yet it didn’t seem to help those who already found the topic hard. For students who weren’t already fluent-ish with negative numbers, the metaphor was a cognitive burden. The following conversation, thinking through ‘3 – -4’,  was quite typical:

Some of these poor students then had to repeat this thought process again and again, without much extra certainty, and made little obvious progress. In other words, the metaphor makes things more cognitively challenging, but these difficulties aren’t desirable: they dilute, rather than sharpen, the focus on the key steps required for procedural fluency. Working memory is overloaded with little performance gain.

Where to next? My current approach is based on Bruno Reddy’s excellent guide on how they teach negative numbers at King Solomon Academy. However, the first time I read it through, the ‘3-4’ lessons he recommends were not feasible within the confines of my own department’s scheme of work. What if you’re not at a school like KSA and only have 1-2 lessons on this?

If you haven’t already, read Bruno’s piece first; everything I’ve planned is adapted from that – though I make a few departures. Essentially, I first break it down into the following rules:

They seem like 3 pieces of information, but it’s worth pointing out that 1 implies 2; the main thing to stress is 3.

These rules are first established, and then emphasised, simply by projecting a vertical number line and working from ‘known cases’ such as ‘3+6=9’ with lots of teacher-call and whole-class response work:

Gradually, I move onto sums with negative numbers as the starting numbers; I then start to move onto cold-calling my slowest-graspers/low-attainers, to see if they’ve got the hang of it. Encourage them to use the number line if they find it hard. Fluency with rules 1 to 3 means nearly everyone has got it after 5-10 minutes.

After that, 10 minutes of practise (whiteboards help), whilst checking on the target kids. (As an aside, the answers here form rough patterns, making it very easy to assess quickly)

Continually stress ‘IN BETWEEN’ and remind students that the ‘starting number….’ “NEVER CHANGES!!” (they should shout back at you). Write a sample question upon a whiteboard, ask ‘are the signs IN BETWEEN the SAME or DIFFERENT?… So what do they both become?’, repeat a lot of times, call and response, cold call, gradually remove the scaffolding clues from the question, and you’ll see them start to get the hang of it.

Show a few examples of how to set it out (with bracketed numbers, and without):

Gently remind them of rules 1-3 in the process, and how you saw them dominate such rewritten questions in the previous task. Then, again, in the remaining 10-15 minutes or so, make them practise silently – and insist they rewrite the questions (so you can see exactly how they get it wrong, if they do).

And that’s it, for 1-1.5 hours’ worth of lesson. I’ve tried it on bottom, middle, and top sets, and they’ve all responded well (but allow more time at each stage for bottom sets). I’ve cut a few things out, and generalised a bit more than Bruno’s method, but it seems to work.

Either way, as Bruno stresses:

they’re not experts by this stage so we keep the skills ticking along in Do Nows, quick warm-ups and homeworks for a couple of weeks. They feature regularly on the same throughout the year.

Remember to test and revise the 5 rules, especially emphasizing Rule 3 (starting number NEVER CHANGES!) and the ‘IN BETWEEN’ of 4 and 5; these 3 rules help them steer clear of the common pitfalls.

Hope that’s helpful. If you would like to download my lesson Powerpoint, I’ve put it on TES here. (It also includes some extension activities that I write on my whiteboard, for those students who are already fluent and zip through the questions in no time).

@HinTai_Ting @MrReddyMaths @RobBrown1991 @naveenfrizvi Only thing I’d challenge is ‘signs same add,’ since when you get to solving sim. eqn. by elim. ‘same signs’ means ‘subtract’

This has given me much pause for thought, as these two rules are minimally different in word form, yet will lead to big difficulties down the road. His method is similar, but instead of teaching ‘same signs become an add’, he teaches something like: ‘after the starting number, a negative sign means you switch direction’; Bruno’s method of teaching ‘adding a negative means going down’ also avoids this trap – perhaps go with this, instead.

Now, my reason for diverting from Bruno’s method, was an attempt to minimize cognitive load and confusion by diverting the horrible ‘two minuses make a plus’ (since students usually already have that in mind) into something useful – ‘so yes, this is true only for signs IN BETWEEN, as long as you remember that the starting number NEVER CHANGES.’ However, the potential confusion later on makes me want to abandon this strategy.

One other reflection from this: meaningful collaboration is fantastic. Please do let me know (by comment or tweet) if you have any other suggestions or spot any other problems; I would have never predicted this problem were it not for Kris’s keen thinking, and it would potentially bubble away for years in some of my classes and before causing chaotic confusion down the line.